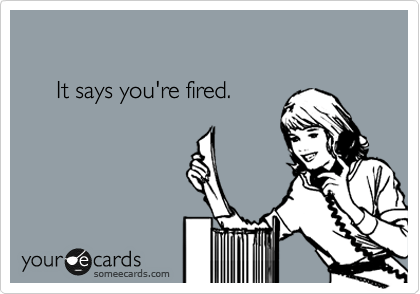 Last week, I received quite the mysterious email from work. I was informed that I wasn’t required to continue working on the project we had been going since the beginning of the year. There’s nothing to misinterpret here, this is my first time I got let go. (The only reason why I found that mentioned email mysterious was because of the timing – just a few days after we extensively discussed strategies and laid out a plan of the steps to follow).

Funnily, my emotional response to that email was non-existent. No surprise, no anger, no sadness, not even worry. And contrarily to what I’d have expected, I also don’t have a feeling of failure. (There were a few factors that lead to my dismissal which have nothing to do with me as a person or with my work.)

I have to add that I’m in the comfortable position of not having to pay rent atm, since I live with my mom. If the situation was different, I would indeed be pretty desperate right now, especially because there was NO notice. (Which is not common at all in Germany if you’re behavior at work was ok. So I’m having that checked.

So today, I went to the office one last time. Of course we talked things through and the reason I got laid off was that I was expected to lead a team, whereas I just saw myself as a part of team. Not that I would be able to take on a leading position in general, but the thing here is that I have absolutely have no experience as a manager. Besides, the fact that I even got hired in the first place took me a little by surprise, which was probably because I had never worked in a similar position or field. I actually felt like a fraud. That impression fortunately diminished after a while. Instead, a feeling of unfulfillment kicked in. However, I’m still glad I made this experience and got a little glimpse into a field that was completely new to me.

And as mentioned, I’m not even mad about losing my job. Probably because it really wasn’t the right fit after all. I almost feel like getting fired is some rite of passage into real, scary adulthood.

But maybe this unexpected change will turn out to be something great. I like the idea that everything happens for a reason. And since my past job didn’t really make me happy (like in the way that is possible for a job), hopefully the next one will.

This site uses Akismet to reduce spam. Learn how your comment data is processed.